Presented at the Reinventing Archival Methods workshop, 29 November 2012, in Sydney.

One weekend, a bit over a year ago, I built this — a wall of faces of people forced to live within the restrictions of the White Australia Policy, drawn from records held by the National Archives of Australia. It created a lot of interest, both here and overseas, particularly after I talked about it at the 2011 National Digital Forum in New Zealand. 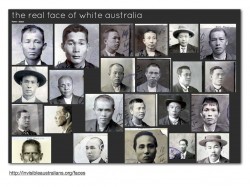 My original post was republished in South Africa, my NDF talk made it into the inaugural edition of the Journal of Digital Humanities. The wall is being studied as part of a digital history course in the US, and was cited by two papers at the Museums and the Web conference this year. It’s also been referenced in discussions on visualisation, serendipity and race.

But perhaps most important was the email we received in which the sender described scrolling through the wall with tears rolling down their face.

It’s also important to note that the project of which the wall forms part — Invisible Australians — is completely unfunded and has no institutional home. It’s a project driven by passion. It’s a project born out of the sense of obligation and responsibility that my partner, Kate Bagnall, and I feel towards the people whose lives are documented in the archives.

Last week I was at NDF 2012, where Courtney Johnston called on us to consider the emotional landscapes in and around our collections. So it started me wondering, what is the role of emotion in the archives?

There is clearly no neutral position. In Archival Methods David Bearman rightly criticises the idea that the value of archivists lies in their political disengagement — as faithful guardians of the accumulated past. And of course archival writers like Verne Harris and Terry Cook have developed this critique in some detail.

Bearman suggests that archives can instead be seen as ‘marshaling centers’, that enable people not to observe some distant past, but to mobilise the past within their own lives — to find connections and meanings.

Recently I was talking to an academic researching the role of historical thinking in education. He argued that an emotional connection had to come first. Only then could rational arguments take root — only then could opinions, ideas and lives be changed.

And yet emotion still seems like something best avoided in public. We try not to ‘inflame’ it, we rarely seek to nurture it. Exposing the rawness of emotion is often seen as cheap or manipulative. And yet it happens, always, in and around our cultural collections.

What user or worker in archives has not been moved? By the voices and stories contained within the records, by the sheer excitement of discovery, or perhaps by the overwhelming burden of responsibility. If as Bearman argues, ‘the pasts we construct are all discussions with the present’, then these discussions are infused with joy and anger, with fear and longing, with sadness and gratitude.

Why are we so reluctant to acknowledge that archives are repositories of feeling? Is emotion meaningless because it can’t be quantified, dangerous because it can’t be controlled, or does it simply not fit with the professional discourse of evidence, authority and reliability.

As our experience of archives moves further into the online realm, so the possibilities for making emotional connections increases — simply because it’s so much easier to share. From the like button or the retweet, through to a lovingly-tended personal collection in something like Pinterest — we have new opportunities to explore what’s important to us and why.

This is happening now. Voices from the past are finding their way into online conversations. But what voices and whose conversations? Even as welcome this sort of engagement we have to remember what is not online, what is not accessible, and all the social, technical and political barriers that can prevent someone from joining the discussion.1

It worries me too that our emotional connections may be too small, too fragile to survive in the world of big data. We live in a age where our online preferences are monitored, our sentiments analysed — our feelings are harvested and tallied in order to sell us more stuff. The line between expression and consumption is increasingly blurred.

Back in the pre-web era, Bearman imagined access to archives through ‘intelligent artifices’ that would bridge databases and connect vocabularies — responding to, and learning from the activities of users. Twenty-five years later we’re exploring these possibilities at a global scale, through Linked Open Data.

While Linked Open Data is often described like a giant plumbing project, it’s really about making a whole lot of very small connections. To me it offers an opportunity to fight back against the homogenisation of data. We can use it to express complex relationships with the past. But we need to know how, and we need to find the points at which we can plug ourselves in.

Perhaps these are Bearman’s ‘marshaling centers’, short-circuiting our online connections to jack us into the past. Not a fixed or nostalgic past, but a challenging and contested past, both real and yet unknowable. As feeling becomes commodified and neutered through a variety of online filters, perhaps archives can hack us directly into powerful conduits of meaning and emotion.

How might this happen? There’s the technical stuff — persistent identifiers, blah, blah, blah — vitally important of course. But then there’s the relationship stuff. We have to stop talking about users and start talking about collaborators. We need to stop building services to be consumed, and start opening opportunities to create, to play, to break and to hack. We are all making connections.

Most importantly we need to find and support the people, both inside and outside our organisations, who are driven by passion. The people who care. The people who simply give a shit.2