Notes from a talk I gave at the Digital Treasures Symposium, 21 June 2013, University of Canberra.

Over the last couple of weekends I’ve been building a bot. Let me introduce you to the TroveNewsBot. 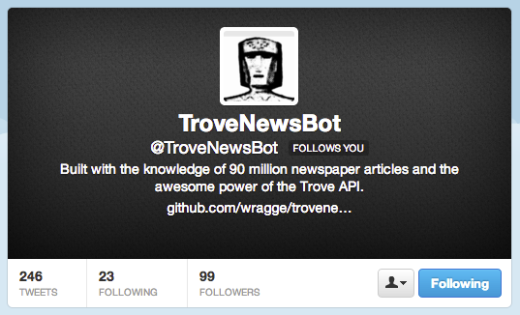 TroveNewsBot is just a simple script that periodically checks for messages from Twitter, uses those messages to create queries in Trove’s newspaper database, and tweets back the results.

TroveNewsBot’s birth was, however, not without some pain. I ran into difficulty with Twitter’s automated spam police. At one stage everytime my bot tweeted, its Twitter account was suspended.

The problem has since been resolved — I think I must have done something when I was testing that upset the spam bots — but it did lead me to read in detail Twitter’s policies on spam and automation. This sentence in particular caused me to reflect:

The @reply and Mention functions are intended to make communication between users easier, and automating these processes in order to reach many users is considered an abuse of the feature.

So what is a user and what is communication? I read this sentence as suggesting that communications between individual human users were somehow more real, more authentic than automatically generated replies. But is a script tweeting someone a link to to a newspaper article that they might be interested in really less authentic than a lot of the human-generated traffic on the net?

Amongst the messages I received when I revealed TroveNewsBot to the world earlier this week was this:

@wragge I love Mr. Trove Bot – nice work! Not an object talking, its a whole database.

And later from the same person:

Even as we live an increasing amount of our lives ‘connected’, still there remains a tendency to assume that experiences mediated through online technologies are somehow less authentic than those that take place in this space that we often refer to as ‘the real world’.

In the realm of cultural heritage, digitisation is frequently assumed to be a process of loss. We create surrogates, or derivatives — useful, but somehow inferior representations of ‘the real thing’.

Now let’s just all admit that, yes, we like the smell of old books, and that we can’t read in the bath with our iPad, and move beyond the sort of fetishism that often accompanies these sorts of discussions.

Yes, of course, digital and physical manifestations are different, the point is whether we get anywhere by arguing that one is necessarily inferior to the other.

A recent article in the Times Literary Supplement expressed concern at the money being spent on the manuscript digitisation programs that the author argued were ‘proceeding unchecked and unfocused, deflecting students into a virtual world and leaving them unequipped to deal responsibly with real rare materials’. Yes, there may be aspects of a physical page that a digital copy cannot represent, but as Alistair Dunning pointed out in response to the article, there’s no simple binary opposition:

The digital does not replace the analogue, but augments it, sometimes in dramatic and sometimes in subtle ways.

In his keynote address to the ‘Digital Transformers’ conference, Jim Mussell similarly argued against a simplistic understanding of digital deficiencies.

The key is to reconceive loss as difference and use the way the transformed object differs to reimagine what it actually was. Critical encounters with digitized objects make us rethink what we thought we knew.

I’m very pleased to be an adjunct here at the University of Canberra, but I’ve always felt a bit of a fraud around people like Mitchell when it comes to talking about visualisation. I’m actually much more comfortable with words than pictures. So why am I here talking to you today?

It’s about creating spaces within which we can have ‘critical encounters with digitized objects’ that ‘make us rethink what we thought we knew’.

And that to me is very exciting.

What might these transformations look like? Who knows? This is research, it should take us places we don’t expect and can’t predict.

However, for the sake of convenience today I’ve tried to define a few possible categories — most, admittedly, based on my own work. But I do so in the hope that the achievements of the Digital Treasures program will soon make my categories look ridiculously inadequate.

When we have stuff in digital form — and by stuff I mean both collection metadata and digital objects — we can isolate particular characteristics and add them up, compare them, graph them. We can start to see patterns that we couldn’t see before.

Putting a lot of similar things together in a way that enables us to see them differently.

Putting different things together in a way that enables us to find connections or similarities.

Displaying something unexpected or random.

This is a very limited catalogue of possibilities, but meagre as it is I think its enough to demonstrate that the overwhelming feature of digital cultural collections is not loss or deficiency, but opportunity and inspiration.

It seems to me that when it comes to digital cultural collections an important part of the transformation process is knowing where to leave the gaps and spaces that invite feeling, reflection and critique. We have to find ways of representing what is missing, of acknowledging absence and exclusion. We have to be able to expose our arguments and assumptions, to be honest about our failures and limitations. We have to be prepared to leave a few raw edges, some loose threads that encourage users to unravel our carefully-woven tapestries.

As I was developing the TroveNewsBot I realised I needed some sort of avatar. So of course I started searching in the Trove newspaper database for robots — there I found Mr George Robot.

George Robot, ‘described as the greatest electro-mechanical achievement of the age’ toured Australia in 1935 and 1936. As one newspaper described, he:

rises and sits as requested, talks, sings, delivers an address on the most abstruse topics, gnashes his electric teeth in rage or derision, while he accentuates his remarks by the most natural movements of arms and hands

But it wasn’t just George’s technical sophistication that inspired comment. Articles also appeared that described George’s love for Mae West and his admiration for Hitler.

Robots provide us with an opportunity not just to marvel at their technological wizardry, but also to think about what it really is to be human.

In the same way, as we start to have new types of conversations with online collections, to explore their many-faceted personalities, we will of course be exploring ourselves.

The digital transformation of cultural collections is not about showcasing technology but about creating new online spaces in which we can simply be human.